For people outside eastern cultures there is a certain allure, especially from those who appreciate gardens and landscape design, in the Japanese rock garden. In its stark simplicity, the Japanese rock garden is easy to behold. Yet it is its deeper meaning that gives it the aesthetic qualities and universal appeal that many people find so attractive. The rock garden is a highly spiritual statement. At first glance it may seem as merely ornamental style, yet a deep significance lies in its form and layout. The rock garden is a metaphor
for something greater. The garden is a microcosm and distinct statement about life. It is a minimalist reduction of clarity and purity. The gardens at Ryoan-Ji are probably the most famous and noteworthy of these qualities. Strength and appeal lie in their mystery and their pervasive simplicity.

The Japanese rock garden is like a poem, free to interpretation by anyone who cares to venture an opinion and in this aspect lies part of its strength. A child may see a sandbox, an intellectual, the metaphor for perfection in the universe, the Zen philosopher may see just rocks. Most critics consider Ryoan-Ji as the prototype for the rock garden. All of 15 rocks and 330 square meters create the masterwork of Japanese Kare-sansui, or dry gardening. This reinforces the fact that Japanese rock gardens are not gardens of massive size or physical complexity. Their overall significance lies on a transcendental plane.

The contrast to western styles and meaning may also shed some light as to their popularity. The typical garden design philosophy of most western gardens is that of central meaning and conceptual philosophy. The Japanese garden reflects more of cryptic and deeply philosophical thought. There is no greater statement than saying nothing at all, for it allows the mind to complete the scene. The rock garden is an allegory, yet one with a meaning that is as elusive
as the meaning of life itself.

Another interesting caveat in Japanese rock gardening is the symbolic raking of sand as a symbol for water. This aspect has allure in its interactivity and in its interesting patterning. What’s particularly interesting about this element is its entry into American culture through small Zen rock kits. A piece of cardboard, some sand, a few small stones, and a rake is all that is needed to
achieve ones own inner enlightenment. While there is commercialism and often a lack of full understanding that often accompanies the use of these kits, they show the general appeal of the concept and basic philosophy.

The rock garden then is a place of thought and a place for reflection and meditation. Through its simplistic forms it provokes thought, reflects the design concepts of an entire genre of gardens, and gives a clue into Japanese Zen and naturalistic philosophies. Dynamic yet simple, full of contrast, the rock garden speaks volumes with every grain of sand. Unique in character and quite recognizable, it has maintained its appeal as garden form, and continues to fascinate people, as it will for generations to come. 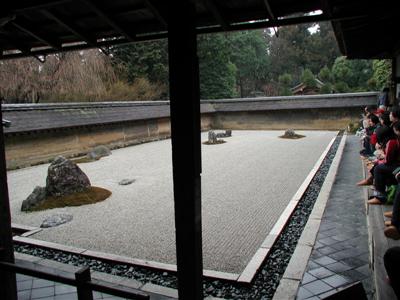 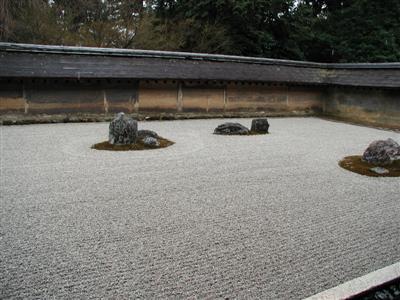 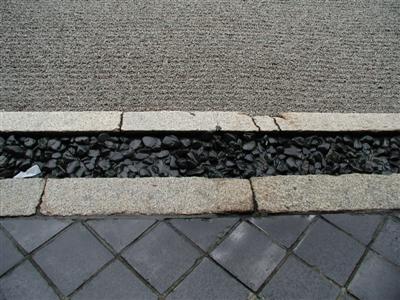