As part of our ongoing Masters Series

Michelangelo Buonarroti was the prototypical Renaissance man. Sculptor, painter, writer, poet, architect and engineer, there was nothing that was outside the man’s reach. Not only did he excel at all these disciplines, but he excelled at them exceeding well. Practically every facet of his work was breathtaking. From his sculpture of David, to his design for St. Peters cathedral, both are to this day incredible. It is interesting to compare his two most recognized areas of expertise, painting and sculpture, with his underemphasized work in design and architecture. There are similarities and differences in their elements, style and overall significance to present day society. Although Michelangelo’s art is some of the greatest in the history of western civilization, his architecture and design work are equally important to western design and architecture.

Mention the Sistine Chapel and the average person will be able to understand and visualize the paintings on the ceiling of the Vatican in Rome. Yet mention to this same person Campedoglio and they may stare at you dumbfounded. Michelangelo was so prolific in his sculpture and painting that many times recognition for his architecture and design is lacking. Yet Michelangelo’s accomplishments in design were pivotal in the evolution of western and renaissance design. His work with projects such as Campedoglio, the Porta and Strada Pia, and the plan for St. Peter’s cathedral showcase his immense architectural vision and abilities.

In regard to the evolution of architecture, Michelangelo was as pivotal as he was in his contribution in art. His abilities in spatial design are incredible as well. Through his use of a distinct personal design philosophy he was able to innovate in the practice of spatial layout and architecture. As Denis Sharp put eloquently “He always subordinated invention to the needs of overall composition, which to Michelangelo was analogous with the symmetry and articulation of the human body.” Michelangelo’s strength laid in his practice of rejecting convention and designing space that did not always obey the strict rules of Renaissance design. This kind of thinking, the breakaway from Renaissance classical ideals known as Mannerism, paved the way for an expansion of thought and innovation that led to the baroque period. He played with the rules in the same way he expanded art, and created something more in the process.

Campedoglio and the Porta and Strata Pia are the lasting and best examples of Michelangelo’s talent for designing space. Campedoglio, situated at the top of Capitoline hill in Rome, shows his ability for spatial design and the creation of unity. Using a modified system of geometry from the classical ideal, Michelangelo, through his use of the oval and trapezoid, was able to create a dynamic and engaging space at Campedoglio. The Porta and Strata Pia showed Michelangelo’s versatility in designing open public space. The design showed excellent definition of space, and use of scale to create a sense of monumentality, as was seen as well in Campedoglio. Both the spaces serve as reminders of Michelangelo’s versatility.

Even though Michelangelo was primarily an artist, his work as a designer cannot be overlooked. The qualities he brought to his art, originality, monumentality, and overall sense of style, can be seen at a much larger scale in his few design and architecture projects. Michelangelo was always busy with work and always moving from project to project as a life of incredible art consumed him. He showed an overall skill and individuality that has never been matched and probably never will. 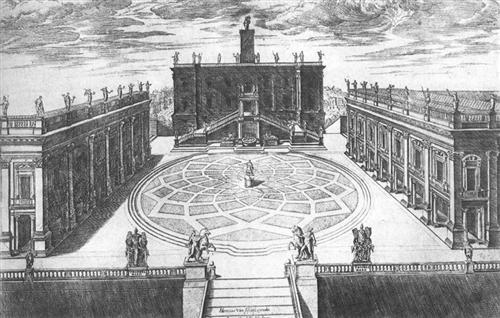