Ireland is not usually the first place considered when mentioning outstanding formal gardens. The gardens of Ireland are not regarded in the same light as those of nearby England, or those sublime landscapes of the continent, such as France or Italy. Yet, in this beautiful emerald isle lie some of the most beautiful and interesting gardens to be found anywhere in the world. The Irish
garden is a compilation. Often employing English style, as the English occupied the country and still exert their influence over the north to the present day, the Irish garden translates that style, as well as those of other European and international influences. Ireland has made these adapted styles into her own, and the nature of the Irish garden has a distinction that differs it from those
of England or the rest of Europe.

The gardens at the Powerscourt estate embody many of these characteristic elements very well. Powerscourt stands out by being different than many other famous Irish gardens. The gardens are important in that the overall design is very formal, they incorporate these formal traits in a way reminiscent of Italian and French garden design, and they bring together all these varied and complex traits into a cohesive whole.

Upon examining the typical Irish garden, it becomes clear that the Irish did embrace the more pastoral romantic landscapes of England that began to develop at the beginning of the 1700’s. These influences clearly had a great effect especially on gardens of the ninetieth century, and it is this more informal style that tends to dominate Irish landscape design of the most famous gardens.
It is this tendency toward the more organic designs of English style that causes such a distinction and contrast in the fewer formal Irish gardens. This is not to say that formal gardening was not a part of the design vocabulary of Ireland, for it was. Victorian designers such as Sir Charles Barry and William Nesfield were using elements Italian style in their garden designs as the backbone of their work. Yet those landscapes of particular distinction and fame in Ireland follow the path laid by famous Irish landscape gardener William Robinson. Robinson’s effect on the design theory of Ireland was similar to the more famous English names of Wise, Kent, Brown and others who pushed the transition to the Romantic, free-flowing, naturalistic garden. As a result the Irish garden, never fully developed an articulated formal style that gained widespread recognition like the more natural gardens that would follow. Still, there were exceptions to this overall trend in development of garden theory, and the gardens at Powerscourt are one of them.

Situated fifteen miles away from the capital city of Dublin in Wicklow County, the estate was the home of the Viscount of
Powerscourt. Encompassing at its peak 36,000 acres, the estate was quite large and provided great opportunities for building and landscape formation. The existing estate was finished in 1770, (although the interior was burned out in a fire in 1974), and from that point the rest of the grounds began to develop. The sixth Viscount of Powerscourt began development of the grounds as a start of their eventual modern form, but it wasn’t until his son Richard, the seventh Viscount of Powerscourt, took over the estate after his father’s death, that estate’s grounds really begin to metamorphose. Through a somewhat complicated series of designers and incarnations, the grounds surrounding the Manor began to take on the shape that they still retain today.

The gardens owe they’re splendor and grandeur mainly to this principal patron, Richard Wingfield the seventh Viscount. His travels to the gardens of Europe, especially those to Versailles, Schönubrunn, and Schwetzingen, had a profound impact on the overall form of the garden. It is because of these travels that the gardens at Powerscourt show such interesting similarities with
these more mainstream gardens and their design elements and philosophies. The gardens at Powerscourt, like Irish gardening in general, incorporated all these influences while maintaining an individuality that gives the grounds a uniqueness and overall sense of place.

The actual design work of Powerscourt was done by a number of designers starting with architect Daniel Robertson. It was Robertson’s overall vision that would set the backbone for what Powerscourt would become. Robertson worked for the sixth Viscount and although he and the Viscount would die before they’re plans were realized, the foundation was set for what was to occur next. Robertson was responsible for the layout of the rounded series of terraces and the incorporation of the existing water elements in the overall design. Robertson also was responsible for the formal Italian design of the gardens that he supposedly emulated from the Villa Butera in Sicily.

The transition in designers following Daniel Robertson’s death meant a fourteen year reprieve from development and it wasn’t until 1854 that the Viscount’s son and Scottish gardener Alexander Robertson (no relation) would team up and continue development of the estate. Alexander Robertson continued and adapted the vision of his predecessor and development progressed. It was under the steady hand, and bold vision of the new Viscount that work  continued although Alexander Roberson also died in 1860. The Viscount then entertained plans from four other designers, and the combination of their work continued to develop the project and its specific details. The first of these was James Howe who continued to develop the semantics of the terraced gardens, and who unfortunately died a year after his Powerscourt plan was created. Later designers followed including Broderick Thomas and Lord Powerscourt’s neighbor Sir George Hodson. These designers continued to articulate the gardens as the design process foraged on.

The result of these no less than six designers and the two lords was nothing less than fabulous. Through its development, Powerscourt developed into one of the most distinctive and interesting gardens in Ireland, and for that matter in Europe in general. The site was a microcosm of European design styles, yet with the unique setting of the rich chromatic green of the Irish landscape, and the backing of Sugar Loaf mountain in the distance the estate achieved something
more than its individual design elements could ever achieve alone.

Distinctive elements of the formal gardens include a beautifully constructed perron designed by Francis Penrose. The perron evokes visions of Italian designs in its style and beauty, using scores of small stones of black and white set eloquently into the terraced steps. This and other elements enriched the gardens’ already strong formal European feeling. Copies of many famous statues like the Hellenistic
Greek statue of Laocoon, ornament the many terraces of the grounds and give the gardens a very continental flavor reminiscent of other famous formal gardens such as Vaux le Vicomte.

Detail is present everywhere in the site, from the beautifully crafted
statuary to the magnificent intricacies of contorting wrought iron shaped in a multitude of elegant forms. Two bold statues of the winged horse Pegasus accent the central pond and are very distinctive in design and have their origins in the Powerscourt coat of arms. Beauty abounds and there is a good cohesion in site between built form and landscape. The landscape functions well as an overall setting and extension of the manor.

Here at Powerscourt is the unheralded Irish formal garden in all its glory. It is this somewhat unique niche of formality that gives Powerscourt its distinction and importance. The garden succeeded in creating a formal atmosphere, and yet with additional gardens such as a Japanese garden addition, and a flawless integration with the more informal countryside and other informal gardens, there was a creation of something larger. With its unique setting and properly fit elements, Powerscourt transcends the ordinary; and when on site or looking at photographs it can become an almost surreal work of art.

The gardens succeed in carrying on the tradition of the Italian Villa and French Chateau. Renaissance architect Alberti would be proud, as the estate conforms wonderfully to his guidelines for villa planning that a site should be oriented towards “familiar mountains”, such as are found in Sugar Loaf looming picturesquely in the distances that lie beyond as Alberti put it, “the delicacy of the gardens”. It has the open feel of Versailles while at the same time
combining the curvilinear themes of the romantic pastoral English designers using its contextual setting. It is a work of combination, done perfectly to create something that is more than its individual styles. The gardens don’t have their own distinct style, and yet they do in their inclusion of all the aforementioned elements. It is in this characteristic that Powerscourt achieves greatness. It is the unlikely formation of a great formal garden in a country not known for its articulation in this aspect of garden design. This contrarian gesture of design against the popular preconception of the Irish garden is what makes Powerscourt grand. 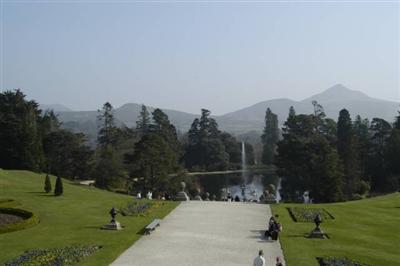