California has implemented its new 2007 building code based on the 2006 International Building Code. The full set of the code is available in hardcopy from reference publishers, but previously was not available online through an official outlet such as the California Building Standards Commision. An open government advocacy website public.resource.org has scanned an uploaded copies of the full code that are available for download in .pdf.

The website argues that under 2002 Federal Appeals Court Decision that posting the code information online does not qualify as copyright infringement because once the code is enacted as law it becomes part of the public domain and does not qualify for copyright protections.

Publishers and code writing bodies argue that in order to produce building codes they incur costs that need to be offset and funded by the sale of code information. The open government proponents counter that increased access to the code and other open source legal information benefits society, and improves adherance and knowledge of building code standards. 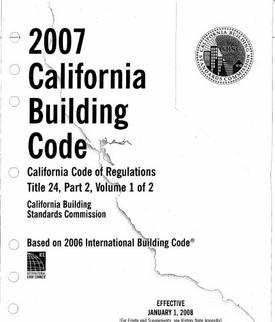