What would you do with a billion dollar building budget? That was the question administrators and architect Richard Meier had to answer when taking on the building of the Getty Center, an art museum and research facility in Santa Monica. The center whose architecture and layout was principally designed by Meier, sits on a majestic hilltop surveying the entire Los Angeles basin. The Center is mainly composed of a central group of buildings, and is complemented with smaller garden primarily designed by environmental artist Robert Irwin. While the Center constitutes a great endeavor as both a piece of architecture and as a museum, there is something missing, something that its billions could not buy.

This is not to say that the Getty Center is a failure or is not a great facility, for indeed it truly is amazing by any circumstances. However, having been to the likes of the National Gallery in Washington D.C. and the unparalleled Louvre in Paris, my expectations for the Getty were high when I visited one sun scorched afternoon. The main problem observed with the Getty is its inability to put its many and complicated parts together into an effective whole. Among the major observed problems were a lack of unity of buildings and a poor interrelation between the buildings and garden.

First of these faults is the poor cohesiveness in the built form. Meier’s architecture attempts to be overpowering and grandiose with its modernist and classical allusions, yet it lacks the bold vision that would have made it successful. Architecturally the buildings seemed to be too concerned with alternating forms and materials than in really making one statement. Meier has his buildings undulating and changing between a variety of different basic forms; this is in addition to changing materials between travertine rock and aluminum paneling, which is distracting and detracting. The result is a building that makes no clear statement, and whose facades look as if they were two designs melded together. It might have been better if Meier had gone with more modernist ideals of simplicity and purity in form. In this way the Getty Center might have had a more universal and powerful appeal.

The overall composition of the center also shows weakness in the relationship between the gardens and buildings. The gardens of the Getty make their own statement that intentionally veers from Meier’s vision. The designer of the garden Robert Irwin had many fights with Meier over form and relationship of the garden. Ultimately Irwin chose his own independent design vision. While Irwin’s garden by itself is quite impressive it fails to hold its own and blend successfully with Meier’s buildings. The gardens do not have equal footing with the buildings, and as a result the garden is put in a subordinate and not a complementary role. Its forms while interesting and effective, do not play off the architecture in an effective manner.

Overall, the Getty Center is an impressive complex and is obviously poised to make a huge contribution to the world of art. Yet from the standpoint of form and space it leaves much to be desired. It seems as if the Getty Trust tried to do a little bit of everything and lacked focus in making the place exude one expressive and unifying feeling. Unfortunately Meier could not do what I.M. Pei did for the Louvre. Pei was able to combine design theories, philosophies and histories, as well as differing forms into a bold and unique design expression. Meier and the Getty Center did not succeed to the same degree in their pursuits, and this lack of unity detracts from the Museum’s experience. 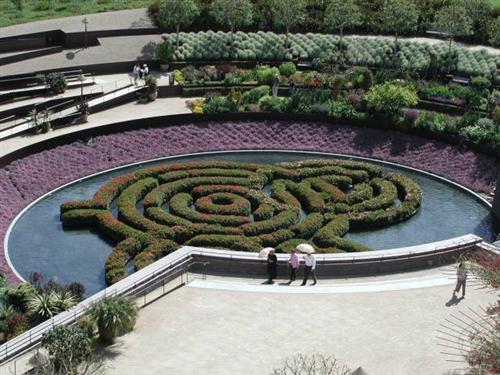